yes, i’m back from my surgery. everything went fine. i was under general anesthetic but i woke up immediately after my surgery with no giddyness and what nots. the nurses and docs were asking me why was i so alert and hyper because i kept making noise about me wanting to pee (sticking a cystoscope into ur pussy is no fun, ok and it makes you have the urge to pee all the time). they just wouldnt let me cos i had tubes and wires and all that shinnits on me and i was fresh from the operation theatre. i was then moved back to day care centre and i told them i want to be discharged immediately but my blood pressure was too low (or was it diastolic pressure?). it was only 31 and they’ll discharge me only if it’s above 55 or something because they are afraid that i’ll faint on my way out. so the nurse quickly made me a cup of milo (since ive been fasting since early morning and the surgery was in the afternoon) and told me to rest. nobody believed me when i said i wasnt giddy, dizzy, drowsy and etc and i was very restless because the urge to pee was killing me. i was allowed to go pee then but it hurt so badly. it felt like a thousand daggers stabbing my vagina whenever i tried peeing. it is then followed by a burning sensation and blood flow. it’s just horribly dreadful. 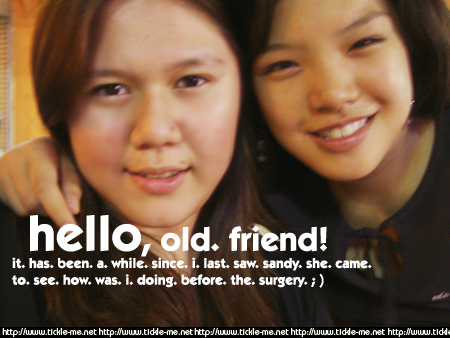 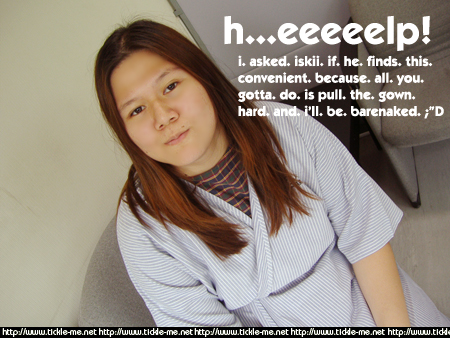 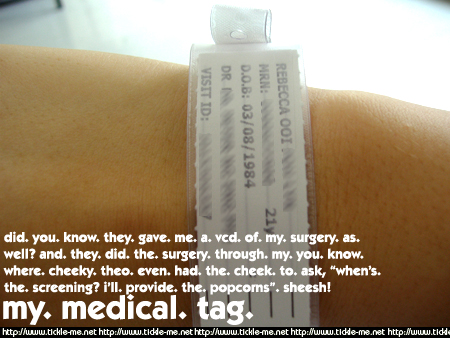 anyways, it’s really has been a tiring day. i was not allowed to drive nor go out at all but to just rest at home right after my surgery but noOoooOo, ive been waiting for da vinci code for almost a year and since ive got the charity premier tix to be one of the first in the world to watch the movie, of course i’m not giving up the opportunity. even if i were to be admitted, i’ll sneak out just to watch it, okay. and i actually took the time to dress up for the movie. well, da vinci code was … moderately okay. maybe because ive been anticipating it for soooo damn long and well, it’s just okay. i’d give it a 2.5989/5. i guess, it’s better to read the book (which ive not yet touch because i dont wanna have toooo high an expectation) after the movie. the castings were alright but the camerawork sucked big time. OMFG. I HATED THE CAMERAWORK SO BADLY! it actually spoilt the movie’s flow and what nots man. i’ll think of more to say later. i’m too darn tired. nobody would believe i just got out of surgery today man seeing that i actually managed to lepak at asia cafe and then attend da vinci code’s charity premier.
anyways, thanks to everyone who came to look for me yesterday, called and texted me. i know a few scolded me because of my stubborness (they wanted me to skip da vinci code) but it was worth it ler. and lastly, thank you my biiloved for being with me at sjmc today, waiting patiently for me while i was in the operating theatre. i love you… bii, more than ever.