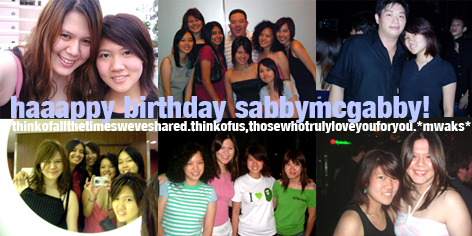 happppy birthday sabbymcgabby! please stop being so obsessed with being an anorexic cos you’re already so tiny and if you try to lose anymore weight, there will be nothing left of you. you’re beautiful the way you are and you’ve got tonnes of men who are willing to kiss the ground you walk on so whyyyyy are you doing this to yourself?

i was just thinking of you as i got up and then i found out it was your birthday. hua, psychic-ish. but yea, have a good birthday and no, liposuction’s a nono! *stares* we miss ya, babes. and happy birthday to my childhood friend, strachan chan keng ghi too. 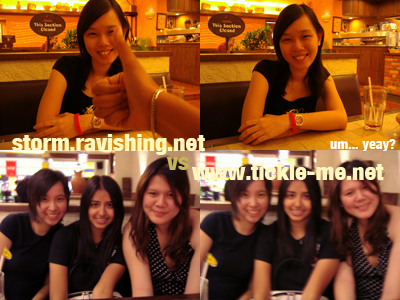 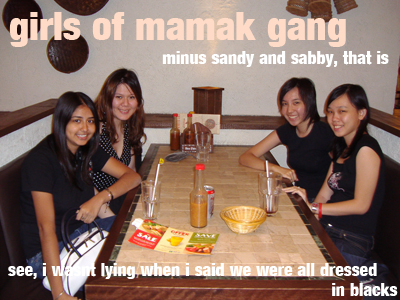 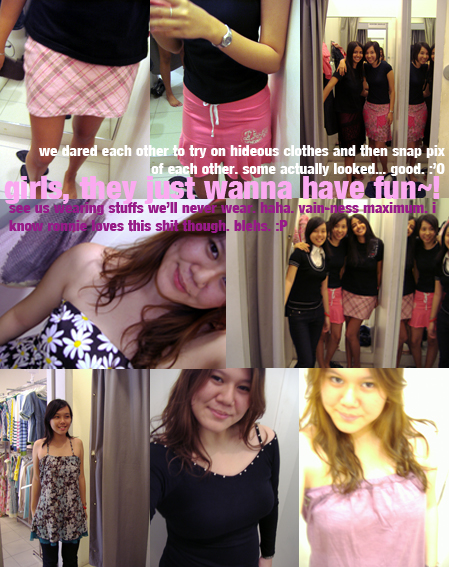 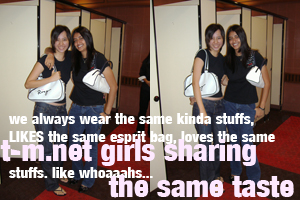 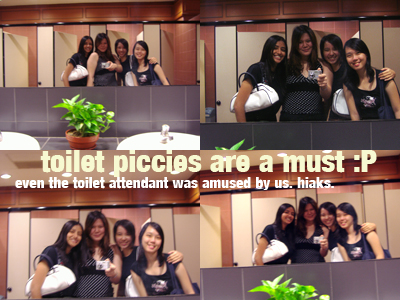 OMFGORGEOUS! i just won a maybelline hamper worth rm150. haha. i was just checking my mail as i was typing this entry halfway and tah-dah, ive won another competition. THRICE IN A MONTH. like wtf. this has got to be the best birthday present ever. i know i get most of my make ups free but hey whattheheck la rite. this is making up for all the bad luck ive had for the past few months *stares at her results paper* yea, got my results. fcking depressing. my standards have deteriorated over the semesters. it’s like as though im losing interest in my studies and ive got such a long way more to go. *slaps herself silly*
oh yea, yesterday, ive finally managed to drag the girls of NMG (so called Notorious Mamak Gang), out for shopping together-gether. me and my galfriends had such a great time. i know i did. esp when we were at nando’s and mcdees. for once, we spent time together without the boys and were able to be so open to one another. we spoke about everything under the sun and i had a great fun. the funny thing is, the girls of MG (the ‘notorious’ was recently added and it’s sorta like a scrambled MNG. eww. let’s stick to MG yea) are always dressed in blacks. if you havent noticed, most of the pix we take together, especially the three girls of tickle-me.net are always dressed in black. O_____o. psychic-ish again! i could do this for a living man. lol. and urgh, ive splurge a huge amount of dough yesterday. *cringes face* now, im officially broke again. 9 hours of walking around on heels. i dunno whats up with me but ppl think im mad to still wear heels at the height of 5’10. no wonder m’sian men are afraid of me. sorry but i cant live without heels. bought more yesterday. god, kill me.
after a tiring day of shopping and running errands, i finally got home. my damn diarrhea from sat’s supper’s still here. lesson learnt, when you’ve made promises to yourself, dont fcking break it. this is how i had to repay for my ‘sins’ for indulging in what seems like a harmless bowl of noodle. four days of nasty diarrhea. as i got out of my shower, daniel beeped me and the next thing i knew, i was ‘kidnapped’ to our fav hangout. we chit-chatted until the cocks started crowing and then headed back home only to see my sis parading in my clothes because she couldnt sleep. *smacks forehead*
and oh, i think the mamak gang’s guy’s habit has gotten into me. driving around with minimal amount of petrol. i started my drive to subang with the petrol indicator slightly above “E”. i then told myself, “lets see what i can do with this amount of petrol”. drove to sunway, then to ss14, then to ss15 and then to sunway and back to bkt jalil and all and i survived. now i dont even know if my bloody petrol can even bring me to the nearest petrol station. but then again, this is what the MG guys would call as ‘champion’ so i guess im one now too. haha. that’s so lame and so not me okay. i always go out of my house prepared. if im going for a trip, make sure there’s more than enough of clothings, food and handphone battery. but yea, it feels good. made me feel macho. lol.
and max made me put this snippet up. im too lazy to put the rest cos this entry’s enough to make a book already.
max: eh so what’s our next move?
becks: um, we sit here so long .. (my mind was thinking about my achievement with the minimal petrol and i suddenly said what was on my mind) petrol so little edi la. wasting petrol.
max: huh…. wwwwhhhat?
*burst out laughing*
iso, who didnt know what was going on was laughing her lungs out too
becks: eh that’s not what i meant … urgggh… nvm
*smacks forehead*
sch