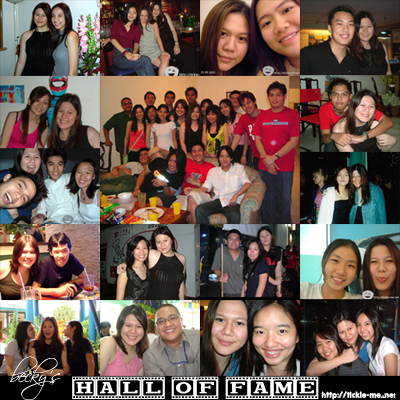 that’s dedicated to all those who means the world to me. fret not, if you dont see your pix there, it doesnt mean that you dont mean anything to me. *muacks*

i got this idea from a few blogger’s site and if im not mistaken it’s dicky or sui lin. now, let’s get to some thrash and bash guys discussions. WARNING: this is a 14 para long entry.
here are some quotes from me and my darling guestbloggers, yeeng and max:
becky : guys are a painful lot whom we love to hate but yet can never get enough of them.
maxine : men are the most unpredictable creatures on earth.
yeeng : guys always give us mixed signals and expects us to understand. (written by becky for yeeng, ho ho).
there. seriously, guys are so undefinable. just like how love is. im speaking this out of my past relationships, current relationship (i love joe 7th to bits so whatever i say here is not about him alone but men generally), observations and friends’ opinions so if you disagree, please dont hunt me down and spear me to death. let’s begin.
1. men always likes to tell you, “nothing” when there’s obviously something wrong with them. that’s because ive realised they dislike to discuss matters because it might hurt their ego, i guess. maybe it’s only with girls because they’ll feel sissy if they were to discuss heart matters with their partners. as for us girls, we like to talk things out until the problem is solved but i guess men just want to keep them aside and hopefully, the problem will just dissolve.
2. men always love to worry their partners. they love to have their fun (get drunk, race cars with strangers who has a face they cant stand and etc) and not let women disrupt them. of course, we being women knows that men needs their space to spend time with their own buddies but when your women calls you or smses you, you know better to answer her calls or at least send her a sms. when you dont, you make us women worry so much because we dont know how are things. if you’re out for heavy drinking, you could be drunk and then you’ll be driving home, of course we worry! god knows what would happen. and then if you are the type who likes to race cars, that makes things worst. i understand that you might find it “fan” (cantonese for irritating or troublesome) but let your woman sleep in peace. and remember, we worry because we love you.
3. men tend to demand to be left alone quite often. it could be either because their “fan” with their financial problems, love matters or family. men rarely worry about their health, unlike women. the thing is, when men do demand to be left alone, it’s best you ladies do because things might get even more strained if you dont. like us, men do need their space too. trust me, when they are alone, they tend to think better than having us women bugging them to tell us why. it’s hard not to keep asking why but it’s worth the effort to try to not make an effort on asking why. got it?

4. whether they admit it or not, men are vain. very. especially dion sean appana. im sure you all know about him, seeing his “tak tahu malu” (malay for thick skin) spamming tags on my tagboard. they want to look gorgeous too in order to attract more (fe)males (but let’s just stick to straight men on this discussion, ok?). it helps to boost his ego too when girls keep eyeing on them or whisper to one another whenever he passes by. you can actually see a man change his style of walking when that happens. he tends to walk in this more macho way. check it out.
5. men hates to admit when their wrong. again, it all comes to their ego. anything that shatters their ego, it’s a nah-uh no no for them. whenever they say something silly, of course most of us women cant stand it so we’ll question them back how is that possible. then he’ll start justifying his statement which will make things sound even more sillier. it’ll piss us off and we’ll correct them. now that they know their wrong, they’ll keep denying it and just try to win over the situation and we women would let them win just so that an unnecessary arguement could be prevented. it’s tolerable at times but not when it happens too often. so men, think logically before you say something.
6. related to the above point, men always have excuses for everything. when you ask them, “why didnt you pick up my call?”, they’ll say something predictable like “didnt hear”, “no battery”, or their num one favorite will be, “nothing” (or they’ll just keep mum). im serious! ive had friends with bfs who answered that. imagine how furious my poor friends got. when you ask them, “why are you late?”, they’ll answer you back, “jam”, “my boss held me up”, “accident”, “police roadblock”, “a dog bit my shoe”, or most likely just another “nothing”. grrr…. arent we sick of hearing the same excuses over and over again? though it could be true, but seriously, how often is it for real? women would really much prefer it if you just admit that you’re late.
7. men are like our second mothers. they are fussy and they nag alot. and im sure that’s nothing new. they always tell us not to nag but little did they realise that they nag us more than we do. “you shouldnt sleep so late. why wont you listen to me? it’s for your own good…blah blah”, “you shouldnt eat that. it’s fattening. your buttons are going to pop out soon”, “you should stop going out late!” and etc. they might sound like they control you but it is really for your own good, just like how we women nag them. of course they shouldnt over do it. i like my man nagging me but sadly, he doesnt really. he gives me all the freedom i want which, take note men, is not really good. beware, a woman with too much freedom might feel like she is not being cared for. but i know my man does and im speaking in general. i love him to bits.

8. men are bitches in disguise. they do bitch over beer and they call it a guy talk. they’ll talk about how mr. k is so ugly that he doesnt deserve pretty miss b. they’ll talk about how their boss is probably sleeping with his client’s wife and etc and that’s guy talk? while us, the meek creatures called women, talk about how unfair our lecturer is to a certain student and they call that bitching. okay, so we dont always talk like that. we might say our lecturer’s unfair and then continue with how the student mustve slept with him to gain the A’s but men do that too. so we’re all bitches. ho ho ho. let’s not deny it. today, i’ll redefine men. all men are bastards and …bitches. rock on! \m/
9. men demands attention. they always want us women to run to them whenever they feel lonely. they want us to praise them, to love them, to cuddle them to sleep and etc and yet they try to call themselves the STRONGER gender and us women, who has to sacrifice our laps for our men to sleep on as we stroke their hair the WEAKER gender? ah puik! men likes to brag and exaggerate stuffs in order to get the ladies (and even some of their fellow male friends) go oo ahh over them. if they hit a seven inch baby snake, they’ll tell you they hit a 2 metres long snake and etc. it happens, admit it, boys.
10. men dislike being told what to do. that’s true, unless you’re talking about mama’s boys. if a men likes to shake his feet, let him. it’s his habit, dont try to change him because men dislike being changed too. it might irritate you but if you love him, you’ll have to learn to accept his habits. and boys, if your gf like to smell her armpit, let it cos if we have to sacrifice, why cant you? ho ho ho.

there are other stuffs on men like how men are always fickle-minded, unpredictable and etc but i’ll talk about it some other time, alright?
there you go. some main points are being helped out by maxine. thanks, babe. im off to bed now. its 5am. i have two presentations on mon and tues and guess what? i havent really started. im so gonna be screwed. see what i do when im too stressed out? i come up with a list of stuffs on men. god save me. amen.