ho ho ho. hi! been busy with my internship lately which is *insert drumrolls please* good! hiaks. but too bad i wont be at work tomorrow as i need to rush to taiping for my cousin’s wedding. but the sad thing is, both of our cars are in the workshop now. ho ho ho. how the hell are we going to get our asses to taiping, that’s a good question. i think my car will be ready by tomorrow morning but it hasnt travelled so far before. i wonder if my poor dennis can take it.

okays, since i’ll be in taiping later for the weekend, i wont be having time to blog then. i owe a few of you shots from our outings, so here you go. the pix are according to time frame so some would look pretty out-of-place. the first few pix are karaoke outing for me, my mom, dylan and yeeng followed by adrenaline awards, work place, bangsar dinner, secret recipe supper, and our shooting scene today. 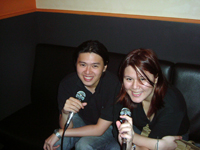 dylan and becky with their mics 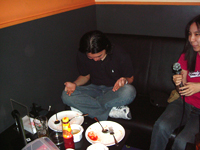 dylan meditating (dont ask me why) 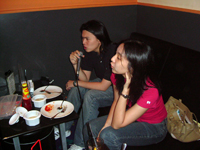 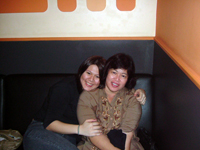 becky and her mom 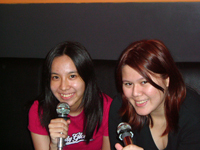 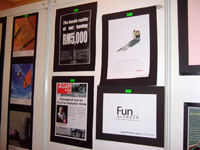 some pix on the exhibition 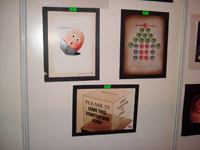 more random pix on the exhibition 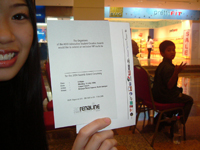 brenda with the invitation card 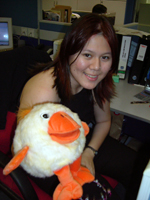 becky at her work place with nicky’s duck 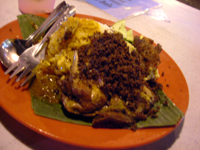 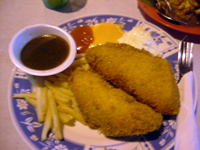 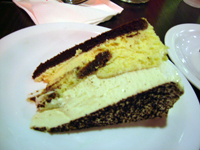 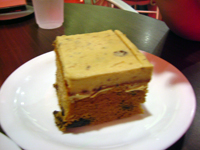 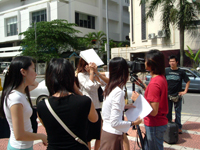 the crew for today’s shooting 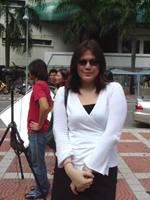 becky with her shooting costume (with extra 16kg) 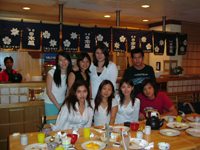 the crew at ichiban’s japanese buffet after a long hot sunny afternoon of shooting
okay, the karaoke was fun. we did lotsa cutting of songs and laughing. my mom fit in so well. i think we had fun that day. right after that, rushed home for shower, sent car to workshop and then of to the adrenaline awards which was the most embarassing and ridiculous event of the century! im not kidding. the organisers of the events should just pack their bags and close shop. and one of the winner’s idea were exactly of a sudan ad campaign and i cant believe the judges didnt know about the campaign because IT WAS AN INTERNATIONAL CAMPAIGN! they were also so cheap skate enough to not only place the exhibition in a dark corner where even the flies dont go, but also to disqualify a few categories because it seems “all entries are so bad that there are no winners”. NGEH?! is there such a thing? lol. they prolly have not enough money to buy the plaques. i dunno. i dont wanna criticise much but yea, alot were really disappointed with it. but anyhow, my uni, luct won the best of the best award. *doh* im so surprised. we only won like 8 awards out of the hundreds of categories. oh wait, didnt they slash off most of the categories? *yawns*
hmmm.. i think that’s about it. the rest, nothing much to talk about. ichiban’s jap buffet rocks! let’s go there for my b’day. hahaha. *yum yum* *rubs tummy*

am so so tired now as ive just gotten back from king arthur, the movie. yawns. i like movies like this. next to watch will be alexander. *yums*