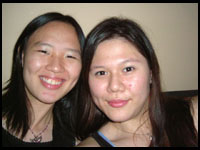 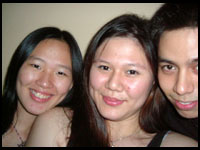 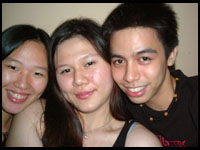 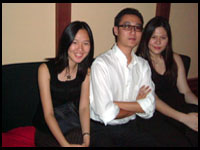 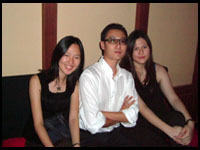 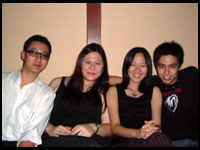 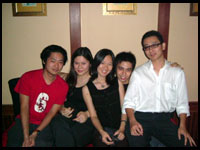 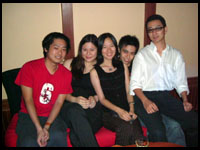 those are some of the pix taken on my first night at chillout, penang. fon fon brought me and shu yin there to meet up with hunky reaper. i didnt get to adore reaper’s face long enough because peter came to pick us up not too long later. i was pretty much busy with my cousin’s wedding throughout my stay in penang. i got back earlier after being pestered by … friends. haha. im so nice, i wont be pointing fingers. im kinda lazy to blog because i dont have the inspiration to do so but i did get a few “naggings” from ppl who have asked me to update. so here you go. 🙂
actually, quite a number of stuffs happened in penang. first, i found out ndru who i didnt think i’d meet up during this trip lived just below my dad’s company’s penthouse. omg. that’s such a blardy coincidence and i ended up meeting him twice! and another thing, i met dan on my second night to chill out. okie, so we did plan to meet up at chillout with our own bunch of friends but when i saw the crowd on sat night, i turned around and was just about to look for dan’s num to tell him im going elsewhere when this guy bumped into me and kept apologising. when i looked up, it was the adorable dan! hahaha. and oh, i was introduced to dan’s cousin, tee jay who now makes one of my funniest chatmates in msn. he is now translating one of the mandarin songs i wrote since he said he wanted to cry. it seems my song has made a few people cried. hahaha. i dont know if it’s a compliment or not. =|
anyway, wern ching flew off to melb earlier today. we were out at william’s corner yesterday. most of them were first timers there. met jim there and we did a very short catch up session because we came with diff group of friends. ive truly missed him and the talks we used to share. and then, zher wyn called me and asked if i was at williams. omg. haha. my first time meeting zher after knowing him for a few years and he could actually recognised me through my friendster photos. so malu-fying. we then headed over to club seven again. that’ll be my hot spot from now on because im addicted to pool and im goddamn improving so stop laughing *stares at dan, berd, yeeng and i-wern*
am currently feeling really really moody and disturbed. has been a week plus already and i hope to overcome this feeling asap. i just got a suprising call from ken jun as im typing this. wow, maybe i should try my luck on lottery tickets since so many miracles have been happening lately. or should i say, unexpected events and im really unhappy about alot of things but for obvious reasons, i cant blog about them. thank god coll’s resuming this thurs. maybe … maybe then things would be on a brighter bit. i wanted to blog on the funny pick up lines ive had or heard or got but it’s 3:15am now and im super tired because i stayed over at yeeng’s place last night. and yes, i know, i owe alot of you ur photos. forgive me, i’ll try to put it up asap or burn em into cds for y’all. been super busy, as you can see. shu yin, thanks a gazillion for the “virginity pills”. my beloved dried prune di0n, welcome back into the blogging world. i miss reading your entries and you. =( *sighs* if only …
currently : drowning herself in soappy chinese love songs