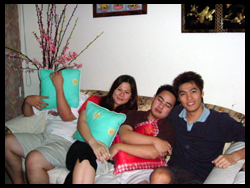 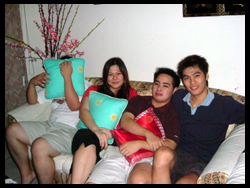 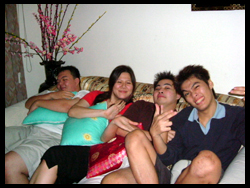 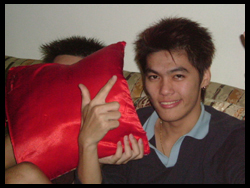 hur. dont you think dan and berd look like an adorable gay couple? check out the first and second pix. they look so lovely together. *batters her eyelashes* this was taken after we went out for some bitching sessions at stevens. fish was there for a short while though.
hmmm… i’ll be at home playing scrabbles on a sat night. dan did asked us to go to barmed though. think he’s going to “i’m special” too. not feeling really well. kinda lost my voice because we were laughing the whole way from steven’s to my place. nothing much. they came over to check out the so called “gothic” chiq my bro brought back to our home. well, she was dressed in my bro’s clothes so i had no idea how gothic she is but she sure didnt look as scary as i was told. terence and the two lovebirds did nothing after that so we decided to watch survivor all-stars which my sis had recorded for me.
my two darlings, joy and ping ping are leaving on v’day to aussieland. sniffles. worst vday gift ever `o( speaking of v’day, i think the group date’s happening. i didnt expect the response to be so erm, well. i was just saying it and now ive got ppl who told me to make it happen. would be nice since i know all of them. it wouldnt be called a net gathering would it cos i dont really fancy such. haha. one thing’s for sure, i dont wanna be at home on vdays and get laughed at by my mom. she’s a meanie. `o( haha. so yea, let’s make the group date happen. oh btw, about the gothic chiq, i drove her and my bro to sunway. read it right. i drove em but with a few erm mistakes. im still not driving smoothly. oh well, practise makes perfect doesnt it? hooray. that’s it. group date’s my current concern. take care. picking mom from shah alam now.