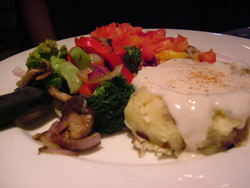 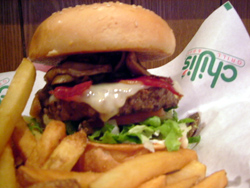 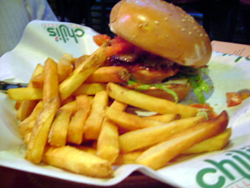 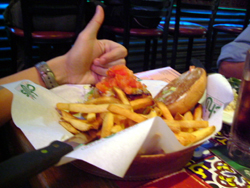 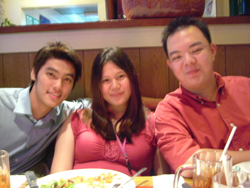 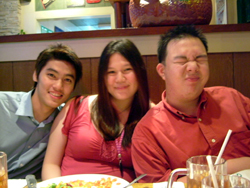 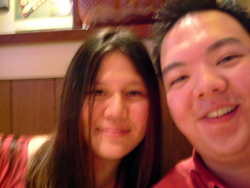 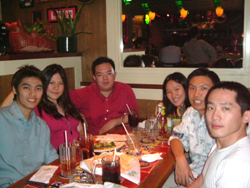 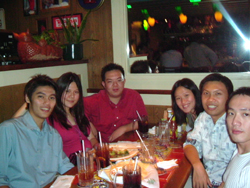 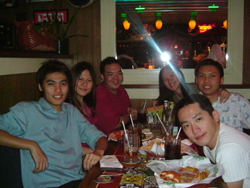 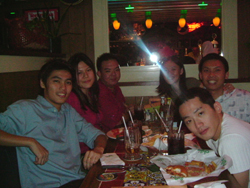 hur. i wasnt supposed to blog but oh well, i thought, the pix couldnt wait though i still owe some of you my cny pix esp those of my cousins. i cant believe dan can actually drool over my 14 year old cous. as for terence, he’s drooling over my 17 year old second cousin. ish. how come no one’s drooling over me, eh? *gets heartbroken* anyway, let’s get back to the pix. yesterday was shu yin dearie’s bday. i only found out last min so i went to klcc an hour earlier and then was joined by terence and followed by dan who came all the way after college (so he was dressed in formal and looking real hot!) to look for shu yin’s pressie. finally, five mins before meeting shu yin, we just grabbed a very cute pink pillow (flower shaped) and yea, that was it. i thought it was really lovely but whether she likes it or not, that’s a diff thing.
we then had dinner at chillies before 6pm because dan was really hungry and guess what? he was the first to complain he’s full. doh! the dinner was really really fun and most of us couldnt finish our meal. i think i have half of my dish left but as dan said, we were too full most probably wasnt much because of the dishes but more because we laughed too much? dan was entertaining us with his bkt mertajam kiasu-ism acts, backed up by us. muehehehe. tommy then join us about an hour later (my apologies, tommy-san). it turned out tommy knew peter since highschool over some chess tournament. then later on, when we were GOSSIPING about fon fon, it seems tommy knows him too, through magic card matches. my gawd. tommy seems to know the whole penang eventhough he has been in california for a few years. muehehehehe. oh btw, fon’s coming down this afternoon for blabbers bloggers. i cant make it though. `o(
alright, that’s all for now. more pix of only my COUSINS (since no one wants mine) and other miscelleneous pix coming up asap. gonna have a small farewell gathering for brandon, one of the oldest #pfs-ians around later in the afternoon. then off to my gf’s house for some mass orgy and then to pick up my singaporean cousins from bus station at midnight. oh man, wish me luck. adios. and oh, happy belated pai ti gong. `o)
currently listening to : christina aguilera – the voice within