omg. this has been a really merry x’mas for me afterall. though i didnt get what i wanted but i got even better suprises. suprises that left me with “laughter overdose”. im really happy and you’ll never see me stop smiling for a while. also, AJ dearest did me a really sweet fansign. i truly love it!

today’s blog is gonna be a lil reporty kinda entry so please bear with it. my x’mas eve started with me and gary having dinner at kim gary, sg wang. the set we ordered were really huge that we even skipped dessert and some cutlet thingy because we couldnt even finish our main course! we then met up with kris and belinda at sfc and headed to segafredo for some x’mas eve drink. they handed us some x’mas special menu but there was no bailey’s or vodka lime on the list. belinda read our minds and asked the waiter if there was vodka lime and hooray, we were all happy to see the waiter nod his head. the drinks were really pricey though but that’s maybe cos it’s not on promotion. you know, from the moment we stepped out of sg. wang, we were being attacked with foamy sprays by passersby and the spray sellers. it really irritated me at first but after midnight, we really had lotsa fun spraying one another. we should’ve gotten our own sprays because we became the prime victims at the bar by the bartenders and waiters/waitresses as our table was situated in the middle. there’s this waiter who kept spraying at me. he went on with stupid trick lines like, “wow, you’re clean” and he sprayed the whole can at me. there was this really kind bartender who passed me a few cans and we attacked them back. we even popped the balloons and all. i feel so kiddy but yet, i couldnt help laughing. besides, i was pretty high because i laughed too much. yes, im that easily fascinated.
after all the fun and all (not forgetting how badly attacked we were by nasty sprayers) at segafredo, we thought we would walk over to atmosphere to check out the crowd and find some of gary’s friends. we stopped by at prince hotel (kris and be’s room) and by the time we rested and all, we were too tired to walk to atmosphere, so we headed home. we girls pretty much lost our voices due to all the screaming. while walking back to time square, some asshole just came up to me and sprayed at me. too bad i wasnt prepared for it or else i would’ve sprayed him back. ish, idiot.
my morning started up with me getting up at ten with a major headache. went to kl to get my bus tix to penang and then im back at home before moving to sunway. i made liang wei waited an hour and a half but it wasnt my fault cos koay ling forgot to tell liang wei about the time changes. but yea, i was late myself. 🙁 we headed out straight to colin’s open house and then straight to bangsar for erm, a drink and catch up session. quite suprised to bump into so many ppl at that odd hour. who hangs out in bangsar during lunch time? ish! hehe… nice meeting you han g, ah hau, aik sua, song jun and erm, who else ah? *scratch head* wanted to head to voyeurs for either pool or some kinda place to foosball but it was all closed. 🙁 chic w3rn was playing at subang though but it’ll be too far to travel to there and all. ah oh oh, i bumped into a few ex-cptians and my then cpt closest friend, li shih. 😛 the closest cptian i am to now are maxine and shu yin darls though! oh yea, i did mention im going penang right? fon, leave me ur number in icq, please? i dont think i have it yet. below are some pix taken with my digicam. am too lazy for the captions. just check my gallery, yea? dont overspoil your eyes, though. 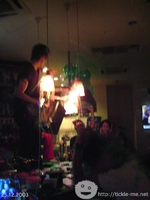 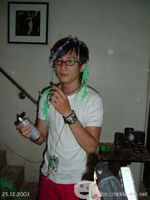 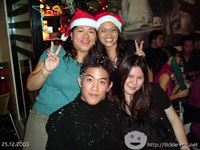 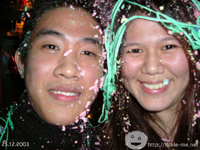 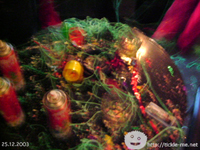 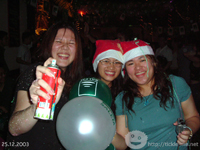 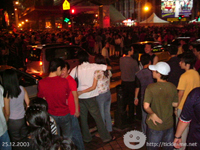 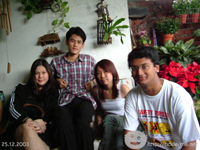 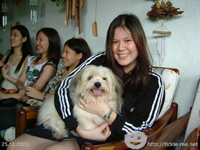 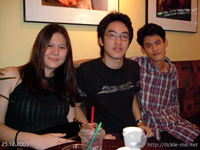